Do you want to produce or are you already producing electricity yourself? If you are a micro-producer, ie you have installed solar panels or other production equipment on your private house or property as a private individual and there is more energy left over from your own consumption that you want to sell back to the distribution network. Then you can conclude a micro producer´s contract with Elektrum. 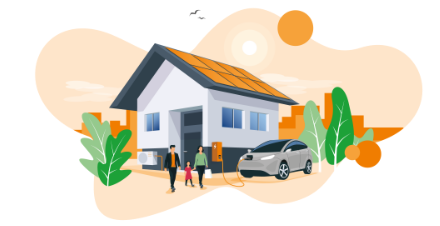 The micro-producer itself produces energy through solar panels or otherwise. If the energy you produce is not enough, you have to buy more electricity from the grid.
If you produce more than you consume, the rest of the electricity can be sold.

To sell surplus energy You would have to conclude a purchase and sale agreement with Elektrum.

Purchase price is based on axchange price called Micro-producers Klõps.

This package is based on Nord Pool power exchange prices.

Enter into an electricity purchase agreement  with Elektrum. It does not incur additional costs or obligations. As a micro-producer, you often consume your own electricity and buy it from the grid, but in warmer times when there is a lot of sun, no lighting and heating, it is worth selling the excess electricity back to your electricity provider. Less electricity is consumed and accumulated when away from home, at work or on holiday.

Entering into an micro-producers purchase and sale agreement

Entering into an electricity agreement with Elektrum